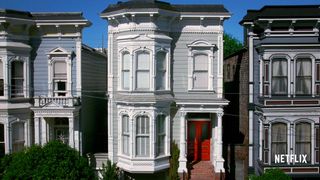 If you were a child of the late '80s and early '90s, there's a high chance that you have warm and fuzzy memories of watching the family sitcom, Full House.

Eager to pray on our immense nostalgia for this unique time in television history, Netflix has released a teaser for its upcoming modern day spin-off series, Fuller House, in which a grown-up and widowed D.J. Tanner (still played by Candace Cameron) enlists the help of sister Stephanie (still played by Jodie Sweetin) and best friend Kimmy Gibbler (Andrea Barber, returning to acting for the first time since the original series) to help raise her three (presumably precocious) kids.

While they won't be regulars on the series, expect appearances from Danny (Bob Saget), Jesse (John Stamos), Joey (Dave Coulier) and Becky (Lori Loughlin) when the show arrives on the service on February 26, 2016.

Though many of these characters are overheard in the teaser as they try to enter the old (and completely unchanged) Tanner household, none of them actually physically appear – how wude!

Still, you'll undeniably be filled with nostalgic feels when you watch the teaser trailer embedded below.