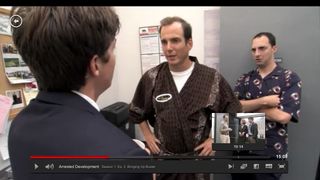 The whole Bluth no available to stream on Netflix

The long-awaited fourth season of Arrested Development is finally available to stream on Netflix as the service's latest original offering.

All 15 episodes of the cult sitcom, which has been on hiatus since it was controversially canned in 2006, are available to stream in one sitting, for avid fans of the Bluth family's ridiculous exploits.

The episodes, which Netflix commissioned last year, reunite all of the original cast members, for what's likely to be the show's final hurrah.

Netflix has said there'll be no more episodes as it continues to establish itself as an original content provider.

Is it any good?

However, if the Arrested Development return proves to be as successful as everyone hopes it will be, then the demand for more will be other-worldly.

Have you sat through the new series yet? Was it worth the wait? Let us know in the comments section below.