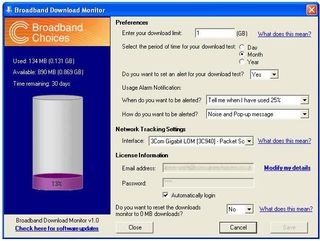 More than 3,000 people have signed a petition calling on Tony Blair to prevent broadband firms from offering unlimited services that then restrict usage through fair use policies.

Many ISPs claim to offer 'unlimited broadband' but as Kevin Peel, the petition's creator, argues, the small print often states that such services are in fact capped.

"The majority of these services are not unlimited, as in the providers' fair usage policies they either cap the use at a defined amount, or use an undefined criteria that only they know," Peel states on his e-petition page, which is displayed on the Downing Street website.

The broadband petition calls on Tony Blair to insist that Ofcom and the Advertising Standards Authority(ASA) investigate the claims. Price comparison website uSwitch.com said it is also calling on the ASA to ban 'unlimited' campaigns.

"If these policies are to be classed as 'fair', broadband companies need to clearly define these limits and explain to customers what will happen when they are exceeded," said Steve Weller, head of communications services at uSwitch.com.

The petition will stay open until 10 June.