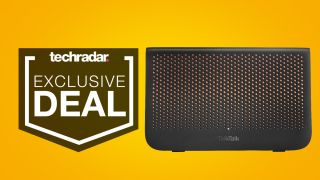 Need to sort your internet out with a fast fibre broadband deal but also want to go on a shopping spree? TalkTalk has the perfect internet plan to fit your niche but understandable needs.

This deal in question lands from the popular ISP TalkTalk. Even if you forget about the gift card and you're paying just £21.95 a month for speeds averaging 38Mb. That puts TalkTalk on the much cheaper side of fibre, securing one of the cheapest deals around.

Then on top of your internet, you're also getting your choice of a £40 Amazon.co.uk gift card, a pre-paid Mastercard to spend anywhere, a Tesco voucher or one for M&S. The choice is yours! And this addition to the fibre broadband deal listed below comes to you readers of TechRadar exclusively.

You can see TalkTalk's deal below but don't leave it too long, we'll be saying goodbye to this offer tonight, with it ending on February 13 at 11.59pm. If you miss out on the deadline, check out our guide to the best fibre broadband deals to see the closest competition.

TalkTalk Fast Broadband | 12 months | Avg speeds 38Mb | Line rental incl. | FREE activation | £21.95pm | £40 Amazon.co.uk Gift Card
Before you even get to the voucher, this is a pretty excellent all-round deal. No upfront costs, monthly bills coming in at just £21.95 and most importantly, speeds averaging 38Mb. Then include the fact you can get a £40 gift card for Amazon.co.uk, M&S, Tesco or a Mastercard and this is a real winner.
View Deal

What other broadband deals are there?

We're big fans of this offer from TalkTalk but it's not the only offer making waves right now. BT, a usually rather expensive ISP, has seen a price drop recently. Taking its Superfast Fibre 2 package with speeds averaging 67Mb, BT has cut the price from £39.99 to £29.99 while still offering up an £80 Mastercard as an incentive.

Or, TalkTalk's closest competitor - Vodafone. Go for its Superfast 1 package with speeds similar to TalkTalk's above and you'll be paying £21.95 (or £19.95 for existing Vodafone customers.)