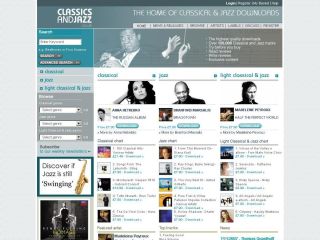 Universal Music has launched what it calls the 'world's largest' download site for classical and jazz music.

The launch follows Universal's most successful year ever. Sales of classical and jazz music during 2006 were higher than ever before. The peak in music sales is boosted by the growing digital download market, and retailers offering more music directly to fans via the internet.

The record company said it has recognised that older collectors are clued up on digital technology. According to data collated by Universal, 60 per cent of people aged 50 are online, and 35 per cent of those have broadband connections.

Some 125,000 tracks from nearly 8,000 albums are featured on the UK-based Classics & Jazz site. Universal said it hopes to increase the number of tracks by 1,500 per month. It will add both new recordings and older, more rare, albums.

Universal said it will provide tracks at 320Kbit/s, twice the file quality of the tracks available from rival music download service Apple iTunes , where tracks are supplies at 128Kbit/s.

Music files are supplied in Windows Media Audio format only, and will not be compatible with the Apple iPod . Prices start at 79p per track, or £7.90 for a typical album.