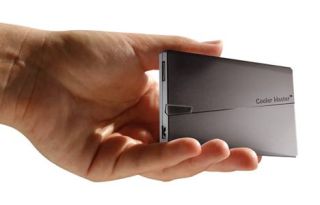 CoolerMaster has announced a neat new laptop power adaptor the USNA95r, offering a slim and light alternative to the bulky standard adaptor and the added bonus of an extra USB charging port.

Having a slimmer and lighter power adaptor is a bit of a no-brainer, with the USNA95 offering nine different charger tips for the various major laptop manufacturers.

But the addition of an extra US charger - which can operate concurrently with the laptop charger, looks to be a nice addition.

"Tired of carrying that bulky notebook power adapter?" asks CoolerMaster's release. "What if you also have to bring along multiple chargers for other devices?

"Cooler Master is here to help with the new USNA95 notebook power adapter that is not only slim and light, but it also charges all USB devices (even at the same time as you're charging your notebook)."

We're still waiting on a UK release date and price - but we're hoping to hear soon.