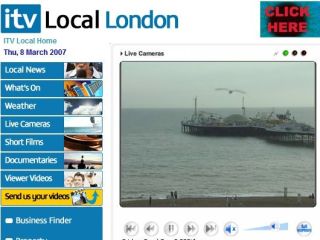 ITV Local is extending to the Central and London regions. The service will launch in other areas subsequently

ITV has extended its on-demand TV service to two more regions. ITV Local offers local news, weather and documentaries for online viewing. The service has been on trial for a year in the southern Meridian region, covering Southampton and Portsmouth.

Now it's extending to the Central region, covering the Birmingham and Coventry area, as well as London. The service will launch in other areas subsequently.

Unlike Meridian and Central, the London region doesn't retain the name of the old ITV franchise that operated there.

If you're in one of the areas concerned, you'll almost certainly find ITV Local of interest. The on-demand local news is the biggest draw - there's also a What's On guide as well a local business finder.

Users can submit their own videos as well, and advertising on the site is minimal. You can expect this to grow as the userbase does, though.

New chief executive Michael Grade told The Sun website today that the network is to make more of its local franchises. When Carlton and Granada merged to form ITV plc in 2004, ITV was re-branded as a single network, rather than each area having a local identity as before.