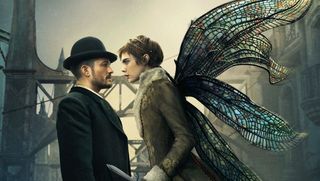 It's official: Amazon Prime Video is going from strength to strength. The streaming platform has been adding exclusive TV shows and fresh news episodes to its already impressive catalogue of content every week.

UPDATE: This month Amazon has added a new dark fantasy series to its catalogue called Carnival Row. Starring Cara Delevingne and Orlando Bloom, the show is about a serial killer who preys on fantastical creatures. Bloom plays the detective hunting the killer down and Delevingne is a faerie. It's as weird as it sounds, but it's also been so well received it's already been renewed for a second season.

Although that means you've always got plenty of new series and old favourites to binge on, it also means it can be tricky to choose which one to watch next. But this list is here to help make that choice a little bit easier.

For those not in the know, Amazon Prime Video is part of the Amazon Prime membership, which means a lot more than just super fast deliveries these days.

For starters, there’s Prime Music, Audible freebies, the Kindle Lending Library, lots of photos storage and the chance to stream great movies and TV shows through Prime Video, which is Amazon’s answer to an on-demand streaming service.

Although Amazon has a huge back catalogue on its Prime Video service, there are lots of mediocre TV options too, which might fool you into thinking they’d be worthy of a watch, as well as lots of truly terrible ones, which we'd prefer you didn't waste your time on at all.

We've collected together a huge selection of TV shows for you to choose from, including shiny new series through to Amazon's own original shows.

In our guide you'll discover our pick of the best Amazon Prime TV shows that are currently on offer. We have options for fans of thrillers, jaw-dropping sci-fi, comedy lovers and those who enjoy nothing more than a fantasy police drama.

These homegrown TV shows are arguably some of the best that the Amazon Prime Video service has to offer (think The Tick and Transparent), which you can watch instantly when you have Amazon Prime access. There are many more shows you can watch through Amazon too of course, but some of these have to be purchased in order for you to start streaming.

We'll be keeping this list constantly updated – if any paid shows become free that we feel need to be included, they'll be added too. Scroll through to see our picks that we've divided up into the following categories: drama, comedy and thriller.

If you can only watch one...

Before he passed away in 2015, Terry Pratchett allegedly made Neil Gaiman promise he'd adapt Good Omens into a TV series, which is what Gaiman has been working on for the past four years.

The result is an addictive, bonkers yet heart-warming tale about good and evil, friendship, demons, angels and a future-gazing witch.

It's brilliantly British, has one of the most stellar casts imaginable and can be binged in one weekend - or one sitting if you can't face waiting a whole night for the final few episodes.

It brings a few fresh characters and twists to the story, but is also faithful enough to the book to give those who have been fans for nearly thirty years a real treat.

Amazon Prime or Netflix? Check out our comparison video below!