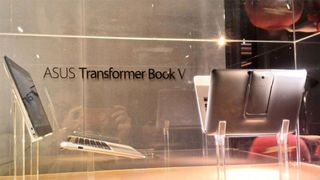 Asus has the knack to unveil its flagship computing products in Computex in Taiwan and this year is no exception as it unveiled what it calls a 5-in-1 device.

The Asus Transfomer Book V combines an Android laptop that can transform into a tablet and a phone and can dual boot Windows as well (although not Windows Phone).

The phone is a full HD IPS handset that's 4G capable with a 5.5-inch display with a quad-core Intel Moorefield Atom processor inside.

It includes a 2,500mAh battery, a rear 8-megapixel camera, 2GB of RAM up to 64GB of RAM and appears to be an updated version of the Padfone Infinity.

It slots into a 12.5-inch tablet (that's also full HD) that contains an unnamed Intel Core processor. It weighs in at 800g, has 4GB of RAM, a 28Whr battery offering up to 10 hours battery life, up to 128GB storage.

The latter converts into a sleek laptop once attached to a keyboard dock that houses a 1TB HDD (but no battery like some previous Asus products).

You can then switch to Windows 8.1 OS by pressing on a button. We expect a 6-in-1 version next year when dual-booting Android/Windows Phone 8 smartphones start to appear on the market.