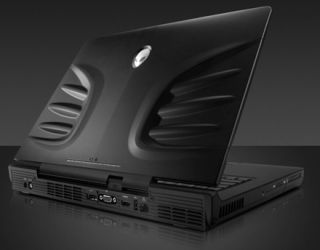 Alienware has launched its new gaming laptop, the M17 (not to be confused with the M17x) which packs in the advanced graphics capabilities of ATI's CrossFireX.

The system goes on sale 'from' £999 featuring the World's First Mobile Quad-Core CPU, the Intel Core2 Quad, "supplying ample horsepower to the system so you can enjoy expanded multitasking abilities and faster speeds when taking on resource-intensive tasks such as playing next-generation games, video editing and more."

Windows Vista 64-bit OS is able to process "twice as much information as a 32-bit version" (obviously), and can use notably more RAM (random access memory).

Finally, an optional internal TV tuner on the M17 "lets you watch, record and save for later all your favourite TV shows and movies, including full HD programming" at up to a 'beyond HD' level of 1200p resolution.