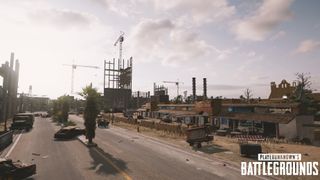 PlayerUnknown’s Battlegrounds (PUBG) is selling up a storm, flogging 20 million early access copies so far this year – yes, it hasn’t even been officially released yet – and Nvidia has some exclusive screenshots of the incoming new desert map, as well as a load of free copies of the game to give away.

Feast your eyes on the grabs above and below, which show that the second map is quite different to the island of Erangel.

It features a war-torn city with plenty of tall buildings and its own shopping mall, along with expanses of desolate desert areas which are wide-open, albeit dotted with shacks and tiny villages.

The map promises some nail-biting conclusions to battles, because as the game progresses and the circle tightens, you’ll be forced into open areas with not much in the way of cover.

PUBG is expected to fully launch with the new map in December, and Nvidia is organizing a big giveaway of the game, with 5,000 free copies set to be allotted to randomly chosen GeForce Experience users.

To stake your claim and grab a chance of winning a free copy, all you have to do is load up GeForce Experience before November 21 (next Tuesday). Winners will be informed by an in-app notification.