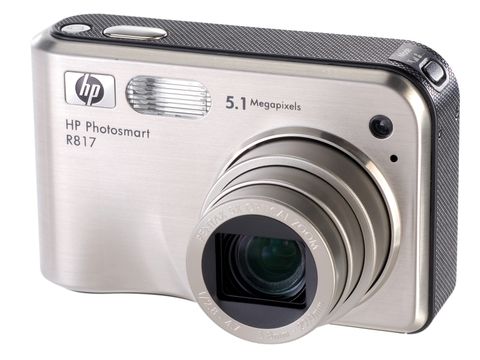 Bristling with high-tech features, our review sample nevertheless struggled with some of the basics, like producing pictures which are consistently sharp

HP seldom builds flimsy kit and the Photosmart R817 lives up to expectations, with a sturdy metal case and a complete lack of protruding knobs and buttons that would risk getting knocked off.

The overall design is a good compromise of having enough buttons to carry out most adjustments without resorting to the menu system, without overdoing things, while the menu system itself is pleasantly intuitive.

Building on its rich computing heritage, HP has designed this model to be less like a camera and more like a computer with a lens on the front. As such, the R817 is rich with in-camera processing facilities, including 'adaptive lighting' to boost detail in lowlights and automatic red-eye removal which builds on the red-eye flash mode.

The camera itself is quite basic, offering 5Mp point-and-shoot simplicity but with a generous 5x optical zoom lens, equivalent to 36-180mm.

A healthy 32Mb of built-in memory is useful for 169 shots at basic VGA (640x480) resolution mode, although this reduces to just nine shots at the best quality 5Mp setting. Power is supplied from a Li-ion rechargeable cell and the camera comes complete with docking station for easy charging and photo transfer to your PC.

Our test shots were a moveable feast, especially in terms of sharpness, which seemed to vary on an almost shot-by-shot basis. Thin diagonal lines, like telegraph wires, took on a decidedly jagged appearance, suggesting a lot of in-camera sharpening rather than relying on the quality of the lens itself.

Contrast and colour rendition proved lifelike and accurate and image noise was good at lower sensitivities, still reasonable at ISO200 but dire at ISO400. A particular niggle was that the layout makes it all too easy to hit the movie capture button by accident, instead of the shutter release.

Bristling with high-tech features, our review sample nevertheless struggled with some of the basics, like producing pictures which are consistently sharp. Matthew Harris