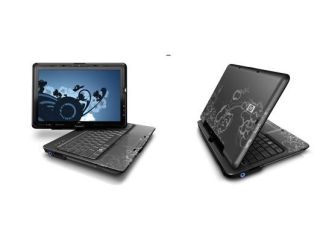 Fresh from its TouchSmart desktop PC garnering a prestigious Best of Innovation Honoree gong from the pre-CES 2009 awards, HP is moving the technology to a laptop.

"The new HP TouchSmart tx2 will transform the way consumers use their notebooks," said Dave Brabham of HP.

"No morescrambling to use the keys and touchpad for simple tasks like navigating your music files, or even for complicated tasks like editing photos - it's all there for them on the screen,"

Costing £799, the HP TouchSmart TX2 apparently features capacitive touch which 'enables more accurate input and distinguishes between a finger and a palm on the display to intelligently disregard accidental brushes or swipes.

'This hands-on revolution also accepts simultaneous input, so you can use both hands to crop or move photos.

Billed as a media powerhouse, the TouchSmart tx2 boasts a compact remote which slots neatly into the PCI express slot when not in use.

The laptop comes with AMD Turion X2 dual core and ATI Radeon HD 3200 GPU, and it certainly looks like it will be a desirable object when it arrives in January 2009.