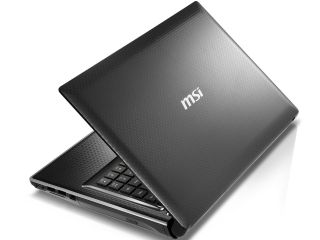 MSI has unveiled it latest laptop, with the MSI FX600 aimed at 'those who demand style, functionality and power from a notebook'.

The MSI FX600 uses Intel Core i3 and i5 processors, and boasts THX surround sound and the company's Cinema Pro technology.

"With just a touch of the Cinema Pro hotkey, the machine instantly kicks into film mode delivering richer colours to maximize your cinematic experience," it continues.

"With four top-end internal speakers for undistorted sound, regardless of music type or frequency band."

MSI is making a big deal of the styling, describing the laptop as 'wrapped in a chic yet durable jet black chassis.'

You can upgrade to a Blu-ray drive and Core i5 should you desire a little more entertainment power.

The FX600 will be available to buy from Argos with a UK release date of August and will cost from £599.99.