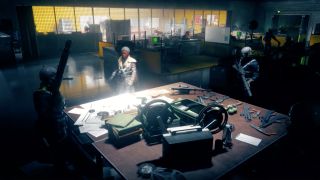 Control, the latest game from Remedy, is all about regaining, well, control of the OldestHouse from the supernatural forces that have taken over - but you won't have to do it alone.

In the latest of its "What is Control" series of trailers, Remedy Entertainment has revealed some of the allies you'll be working with to solve the mysteries in its X-Files-esque world. Not only should these allies help you defeat the enemies you'll run into throughout the course of the game but will provide guidance and help unveil the truth behind the Oldest House and the FBC.

If you're unfamiliar with the game, Control puts you in the shoes of Jesse Faden, the new director of the FDC or Federal Bureau of Control - a clandestine group that is in charge of researching and enforcing supernatural events and entities. Think of it like Men in Black, but directed by David Lynch. The game takes place after the FBC loses control of the Last House, basically FBC headquarters, to a supernatural force called The Hiss.

Its good to see that players won't be alone in their task to regain control over the last house, and it looks like there will be some interesting characters to meet in your time with the game.

And, it looks like there will be some familiar faces. For instance, Sean Durrie, who starred as Nick Masters in Remedy's last title, Quantum Break, will be returning in Control. He will be playing a mysterious character that "has an interesting connection to Jesse."

We're not sure what that means, and Remedy isn't being more specific, but we're sure the answer will be as mystifying as the trailers leading up to the game's release.

Control is out August 27 on Xbox One, PS4 and PC. And, on PC, it will support all the latest ray tracing technology, provided you have the Nvidia Turing graphics card to back it up.