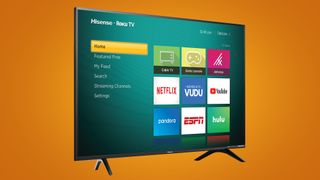 The Roku TV smart platform may be a huge hit in the US – and included in one of every three televisions sold – but it's only just arrived in the UK thanks to a partnership between Roku TV and Hisense.

The new Roku-enabled 4K HDR TV models have landed in the UK in time for Black Friday 2019, which add to the Hisense 2019 TV range.

There's a good range of choice with Hisense and Roku TV models coming in at 43”, 50”, 55” and 65” screen sizes, all of which are available to buy now exclusively via Argos.

43-inch 4K HDR Hisense Roku TV: £329 from Argos
If you're buying a TV for a small living room or bedroom, then the 43" model from Hisense is for you. For under £350 you can grab yourself the first Roku-enabled TV in the UK. View Deal

55-inch 4K HDR Hisense Roku TV: £479 from Argos
For bigger rooms and homes with more space, it makes sense to invest in a 55-inch or bigger TV screen. This partnership between Hisense and Roku TV brings you 150,000+ movies and TV episodes across a range of apps such as Netflix, Now TV, BBC iPlayer, ITV Hub, All 4 and Freeview PlayView Deal

65-inch 4K HDR Hisense Roku TV: £699 from Argos
The biggest of the bunch, this 65-inch Roku 4K HDR TV might be the priciest as well, but is a good deal for a smart TV with a 4K Ultra HD display resolution and the Roku OS built-in.View Deal

All four of the Hisense and Roku TV models are, as you'd expect, powered by the Roku OS.

This means they have a customisable home screen that displays all of your entertainment choices, including gaming consoles, set top boxes and of course many streaming channels, like Netflix, Prime Video and NOW TV.

You'll also be able to access Freeview Play, which brings live TV and on demand content from BBC iPlayer, ITV Hub, All 4 and My5.

If you're not in the UK, you can see today's best deals on 4K TVs below: