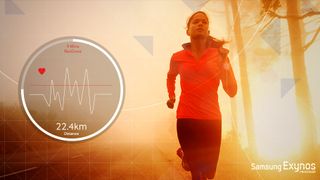 Samsung hasn't released a smartwatch this year – impressive considering we saw five new wearables from the company during 2014 – so it's about time we got a new one, and a new teaser suggests it's coming soon.

The accompanying image, which you can see below, features a circular heart rate monitor and another circular dot on a woman's arm suggesting we may be getting a round Samsung smartwatch for the first time.

We haven't seen an Exynos powered smartwatch from Samsung since the Gear 2 and Gear 2 Neo - both the Gear Live and Gear S use Snapdragon 400 chips - suggesting this is going to be a new addition.

Not much else is known about the next Samsung wearable but we've reached out to Samsung for some comment on what's coming soon. We'll keep you posted once we hear more.