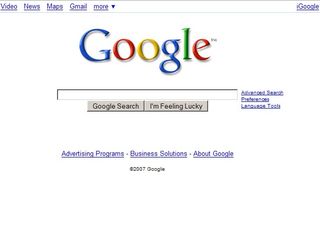 Google - it does search engines, you know

We all know Google is dominant in internet searching. But now it's running away with mobile searches too.

Google managed to amass 61 per cent of all mobile searches in the last year, compared to Yahoo! on 18 per cent, and MSN on only five per cent (did you even know it did mobile searches? We didn't.)

The absolute owning of the other search engines can be attributed to the rise of the iPhone. Google is the default search engine, and as the company has previously stated, the number of mobile searches was 50 times higher than any other handset.

The guys over at Arstechnica raise a good point about the lack of Windows Live Search too: namely, why is it not more popular when the browser has it baked right in?

They claim that Opera Mini is such a popular platform as an alternative browser for the WM users that it has usurped Live Search and instead given more traffic to Yahoo!

But it could also be indicative of the low browser penetration rate of these smart phones, which often make web access convoluted compared to the WiFi magic of the iPhone.