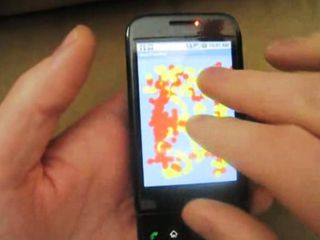 Multi-touch screens for the G1

An enterprising coder over in the US has had a look at the T-Mobile G1 and decided that, well... it's not enough like the iPhone.

Of course, it's not meant to be the same, but the lack of things like multi-touchy on the screen really irk those that shunned Jobs' device in favour of other handsets.

Hacker Ryan Gardner has managed to work out a way to modify a finger painting application to accept dual inputs at the same time, at least proving the concept that many have believed possible according to the debug logs.

However, it's clearly a long way from being perfect, something Gardner himself acknowledges in the YouTube video... but at least it shows that it's possible, and if one person can manage to get this far, think about what's possible in the future!

Well, mainly a multi-touch interface for the G1, but we still like the sound of that anyway, so come on G1 people/the wider development community... Android is meant to be the open-source interface that promises to offer a fix to every problem you can think of.