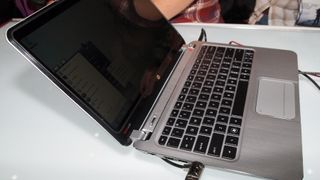 The wait continues for HP's thinnest Ultrabook yet

HP is having difficulty fulfilling orders for its latest and greatest Ultrabook, the Envy Spectre XT.

The HP Envy Spectre XT was announced back in May, with an expected launch date of June 8. However, now at the end of July, orders are still backed up.

"We are contacting all customers who have placed orders to provide updated expected delivery dates."

The Envy Spectre XT was set to be HP's new top-end Ultrabook, billed as the firm's thinnest and lightest to date, weighing 3.07 lbs and measuring 14.5mm thick.

Attempting to place an order now for the Ultrabook shows a new expected shipping date of August 28.

Other HP laptops, on the other hand, show a shipping date of August 14.

HP has not provided an explanation for the delay.