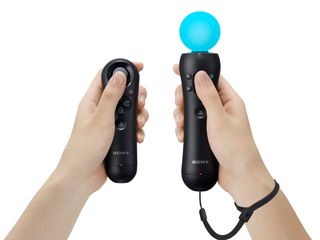 Ever since Sony unveiled its motion controller at E3, the world has been waiting to see what the final incarnation of the product would be – and the company has finally shown off the product at the Games Developers Conference.

Now called the PlayStation Move and complete with a sub-controller (basically a nunchuck), Sony's motion controller will take on both Nintendo's well established Wii and the forthcoming Xbox Natal.

"The combination of the PS3 system and PlayStation Eye camera detects the precise movement, angle, and absolute position in 3D space of PlayStation Move motion controller, allowing users to intuitively play the game as if they themselves are within the game," explains Sony.

"PlayStation Move motion controller delivers unmatched accuracy through its advanced motion sensors, including a three-axis gyroscope, a three-axis accelerometer, and a terrestrial magnetic field sensor, as well as a color-changing sphere that is tracked by PlayStation Eye camera.

"Through PlayStation Move system, both fast and subtle motion can be detected, whether the user is swinging a tennis racket, or painting with a brush.

"With PlayStation Move motion controller, users can provide direct input through action buttons and an analogue trigger, while receiving physical feedback from rumble functionality and visual feedback from the sphere's ability to display a variety of different colours.

But more importantly - what does it look like. Here are the official product shots of the Sony PlayStation Move.