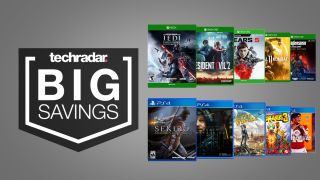 If you've just picked up a cheap PS4 or Xbox One you'll be looking for the best games to play for less right now. Luckily, we've been looking for exactly the same thing. We've gathered all the best cheap game deals on 2019's hottest releases to bring you last year's roster of award-winning titles at great prices. As we roll further into the new year, these cheap games deals are getting hotter and hotter to make way for the new releases just around the corner. That means us players can take advantage of low prices and catch up on a backlog of releases or stock a brand new console with all the best games 2019 had to offer.

If you've recently picked up a cheap console, or you're simply feeling the holiday spend a little this month, you'll want to find some cheap games to tide you over until 2020's major releases begin. Lucky for you, we've been searching high and low for the best game sales around, bringing you discounts on all your favorite PS4 and Xbox One releases plus cheap PC games to boot.

Resident Evil 2 | PC | $17.09 at CDKeys
With the announcement of a Resident Evil 3 remake, this Resident Evil 2 2019 remaster has hit new price lows this week. Generally regarded as one of the best games of 2019, this lower price tag is even more welcome on a fantastic game with a fresh coat of paint. You can find it for $25.79 on PS4 or $37.84 on Xbox One. View Deal

The Outer Worlds | PC | $35.59 at CDKeys
The Outer Worlds was a fairly late 2019 hit, but a hit none the less. Explore the strange planets of a post-Earth civilization and become whatever space ranger you envision in this sci-fi RPG from Obsidian Entertainment. The cheapest we've found this week is a PC deal on this game, but you can also pick it up for less on Xbox One for $40.99 at Amazon, or PS4 for $37.99. View Deal

The Outer Worlds | PS4 / Xbox One | £29.99 at Game
Explore the planetary corporate systems of The Outer Worlds and become whatever space ranger you see fit to inhabit. This Obsidian RPG has been hailed as one of the best games of 2019 by critics as well as its audiences. Linked here is the PS4 version, but you can pick it up for the same price at Currys on Xbox One or £26.99 on PC.View Deal