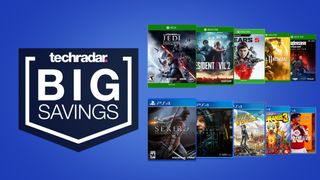 We've collected all the best cheap game deals from your favorite retailers just in time for the weekend, so you can spend less time shopping and more time playing. We're seeing some particularly cheap PS4 game deals right now, but you'll find plenty of sales on cheap Xbox One games and loads of discounted PC titles as well. We've sought out the best games to hit each system in recent months and then found the best places to buy them, so stick the controllers on charge and get ready for some blockbuster gaming.

There are some stunners available for even more surprising price tags right now, including titles like Star Wars Jedi: Fallen Order, Rage 2, Gears 5, and The Outer Worlds all reduced in cheap game deals.

Rage 2 | PS4: $29.45 at Walmart
This is an excellent price drop on Rage 2 for PS4 and Xbox One from Walmart this week, offering the latest Rage title for $43 less than its RRP. A standout title of 2019, you'd do well to grab this price before it rises again.

Resident Evil 2 | PC: $16.09 at CDKeys
With the announcement of a Resident Evil 3 remake, this Resident Evil 2 2019 remaster has hit new price lows this week. Generally regarded as one of the best games of 2019, this lower price tag is even more welcome on a fantastic game with a fresh coat of paint.

The Outer Worlds | PC | $26.79 at CDKeys
The Outer Worlds was a fairly late 2019 hit, but a hit none the less. Explore the strange planets of a post-Earth civilization and become whatever space ranger you envision in this sci-fi RPG from Obsidian Entertainment. The cheapest we've found this week is a PC deal on this game.

Xbox Game Pass Ultimate: 3 Month Membership: $24.99 at Amazon
A fantastic deal! You can save $20 on the Xbox Game Pass at Amazon. The 3-month membership Includes Xbox Live Gold and over 100 high-quality console and PC games.
View Deal

Resident Evil 2 | PC: £11.99 at CDKeys
The survival horror phenomenon is back, and with a fresh coat of paint Resident Evil 2 continues to terrify players well into the 20's. You'll find the 2019 remaster for just £11.99 this week on PC.

The Outer Worlds | PC: £19.99 at CDKeys
Explore the planetary corporate systems of The Outer Worlds and become whatever space ranger you see fit to inhabit. This Obsidian RPG has been hailed as one of the best games of 2019 by critics as well as its audiences.