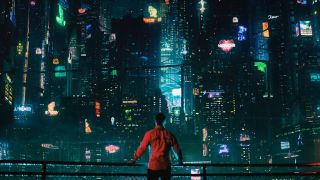 UPDATE: A second teaser has arrived which offers a bit more of a look at the upcoming series, Altered Carbon, which will be arriving on Netflix on February 2, 2018. The new teaser has been added below the original 'date announcement' teaser.

Based on the beloved science fiction novel by Richard K. Morgan, Altered Carbon tells of a future where human consciousness can be transferred between bodies, effectively rendering death obsolete.

The Netflix series, from writer/producer Laeta Kalogridis (Terminator Genisys, Shutter Island) and director Miguel Sapochnik (best known for directing the 'Battle of the Bastards' episode of Game of Thrones) stars Joel Kinnaman (Netflix's own House of Cards, The Killing).

He plays Takeshi Kovacs, the last remaining member of an elite squad of soldiers who is killed only to wake up centuries later in the body of a disgraced cop. Now, he must find out who did this to him and why.

One look at the trailer below and it's clear that Altered Carbon is an expensive undertaking for Netflix. With its Blade Runner-esque visuals and immense scope, we can't wait to binge the entire series when it arrives on the service on February 2, 2018.