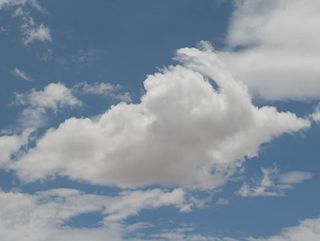 Clouds - just as the Met didn't predict this summer

The Met Office, which houses a £30 million supercomputer, is one of the most polluting public buildings in Britain according to a government list carbon footprint list.

The Met Office uses one of the most powerful computers in the UK, capable of performing 125 trillion calculation a second, and of wrongly deciding that the nation was in for a barbeque summer.

By 2011 when it is running at full capacity the computer will draw a stunning 1.2 megawatts of power.

All of this means that the Met Office is both predicting and tracking global warming, appearing as the 125th highest CO2 producer in a list of the most polluting public buildings released by the Department of Communities and Local Government.

Of course, the Met Office's advice to airlines does save huge amounts of unnecessary fuel expenditure.

And presumably all the bags of charcoal stockpiled by people expecting to get out in the garden, are helping as well.

Universities and hospitals dominate the top of the list – with the University of Manchester top, followed by St Barts and Scarborough Leisure Services.