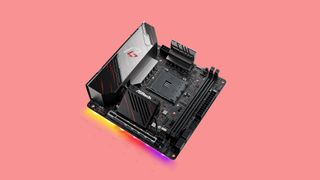 When you're setting out to build a new PC, there are a couple things you need to take into consideration – if you're getting an AMD processor, you have to use a motherboard and a cooler that are compatible. Well, not anymore.

Now, just taking a look at the motherboard, it looks like the cooler compatibility is the way it is because of the rectangular shape of AMD coolers, where Intel coolers are square. There isn't much room on this motherboard for a cooler because, well, it's a mini-ITX board – the smallest form-factor for a motherboard. This is coupled with the fact that X570 motherboards in general have more robust VRM (voltage regulator module) cooling, and thus less room, thanks to the increased power requirements that its new features require.

Before you go out and just buy the first Intel-compatible cooler, you should keep in mind that, because Intel and AMD chips are different sizes, there won't be universal compatibility. Our advice? Check Asrock's official list of supported CPU coolers and pick from those.

However, having Thunderbolt 3 on an AMD platform is huge. Thunderbolt 3 offers much higher data bandwidth than standard USB 3.2 connection – up to 40Gb/s (Gigabits per second), compared to USB 3.2's 5Gb/s. Previously, this technology was exclusive to Intel processors because, well, Intel made it.

At the end of the day, we could take or leave the cooler compatibility – its neat, and its interesting to see, but the Thunderbolt 3 compatibility is important, and could potentially lead to wider adoption of the standard across the computing world. We would love to start seeing AMD laptops supporting the standard, as it could loosen Intel's chokehold on the Ultrabook market.