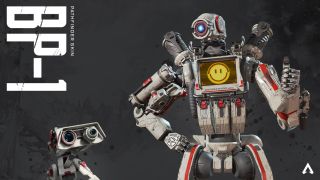 Respawn Entertainment has had a busy year, releasing both hit battle royale Apex Legends and single-player Star Wars Jedi: Fallen Order within months of each other. But now the developer is colliding the two worlds, bringing a Star Wars inspired skin to Apex Legends - for free.

Apex Legends players can pick up a free BD-1 skin for Pathfinder - that's the little droid from Fallen Order - that changes the friendly Legend's appearance to white with some red bits. We didn't say it was the best skin in the world...

It's very simple to claim the free BP-1 Pathfinder skin, simply log in to Apex Legends on Xbox One, PS4 or PC between December 3 and January 14. Simple!

In celebration of the launch of #JediFallenOrder, we’re releasing the BD-1-inspired, “BP-1 Pathfinder skin.” To claim the skin, simply log in to Apex Legends from Dec 3 – Jan 14. Congratulations once again to the Jedi team here at Respawn! ❤ pic.twitter.com/Y075K3VjtFDecember 5, 2019

Apex Legends was a hit straight out of the gate for Respawn Entertainment (although it's lessened in popularity), but Star Wars Jedi: Fallen Order received a bit more of a mixed reception.

In our Star Wars Jedi: Fallen Order review, we said:

"Fallen Order is the definition of a mixed bag, a muddy combination of trending influences with some that land and others that fall way short of the mark. The combat system at its core is impeccable fun and we struggled to put the game down, but the rest of the experience feels very disparate and bloated, and the downtime will always leave you longing for more of the brilliant moments of action."