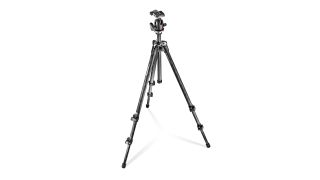 The new camera supports are aimed at photographers looking to take the next step with their work.

Designed to appeal to those who are not beginners, but not yet professional photographers, Manfrotto has aimed to produce a balance between performance, practicality and versatility.

The 290 series is designed to be easily transported, but stable when open. Manfrotto has developed new carbon tubing, which uses optimised fibre angles to provide rigidity and stability when compared with aluminium tubing.

As photographers develop and change their shooting style, they may find they quickly outgrow basic tripods. However, the 290 series has the ability to interchange heads for different purposes.

The 290 series will be available in two variations, a 294 model which has larger diameter leg tubes and 3-section tripod legs for extra rigidity and vibration resistance, while the more compact 293 model has narrower tubes and 4-section legs so it can fold to a smaller size.

The tripods also have strong aluminium leg levers with adjustable locking tension which can be tightened for stability and reliability. Manfrotto claims that the tripods are "almost certain to outlive the camera it was bought to support."

The Manfrotto 290 series price has yet to be confirmed, along with availability.