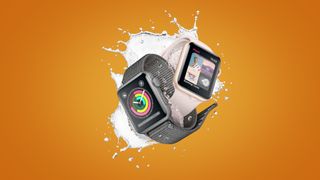 We've scoured the best Apple Watch prices and sales currently available online. Apple's smartwatch is the most popular of its kind on the market, so finding the best deals can be a difficult task.

The most recent watchOS 6 is available for all Apple Watch owners from Series 1 to the brand new Series 5, meaning picking up an older watch doesn't come with the risk of outdated software. If you don't have an iPhone running iOS 13, however, you'll be able to update to watchOS 5.3.3, keeping some of the newer features without relying on the latest iPhone models.

Below you'll find all of the best Apple Watch sales we've found, from the Series 1 watch to the latest Apple Watch 5. We also threw in a few places to buy Apple Watch bands a little cheaper than you can pick them up from Apple.

Is the Apple Watch price worth it?

Apple's hardware often comes with a high price tag, and the Apple Watch doesn't fall far from the tree. That said, if you're looking for a smartwatch to work with your iPhone no other brand comes close to offering the functionality of Apple's own timepiece. While the Apple Watch price is still higher than many other brands, you're paying for integration with a massive number of apps you're already using on your iPhone. Plus, with all the Apple Watch sales happening and the recent software updates to older models, you can easily grab a great deal.

The Series 5 smartwatch now features an Always-on Retina display - fixing one of users' biggest frustrations with the previous models. The dimmed display will now display your current watch face at all times, lighting up when the watch detects the same wrist motion that would previously trigger the screen to wake. It also includes new location features like a built-in compass and an updated Map app.

On release, many users started reporting a decrease in battery life quality in the Series 5, an issue that didn't seem to improve by switching off the always-on display. This has since been resolved with the release of watchOS 6.1, suggesting that the battery-saving features of the always-on display weren't the issue at fault.

The Apple Watch 5 also offers improved safety features with the ability to make international emergency calls in over 150 countries, even without your iPhone nearby. Apple Watch sales on this latest model might be limited, but with Black Friday around the corner, you may be able to find the discount for you.

Stream music and stay connected without your phone

The Series 5 smartwatch includes LTE connectivity which allows you to get internet and phone connectivity on your watch even when your iPhone is far away. You can stream music, make calls, receive notifications with just your Apple Watch. Apple Watch sales rarely take the separate cellular plan you must purchase for your LTE enabled smartwatch into account, so make sure you factor that cost into your decision.

The Apple Watch Nike allows you to track your workouts and listen to audio-guided runs with the Nike Run Club app. The sporty smartwatch also includes a new face that was inspired by the classic Nike Windrunner jacket design. The Apple Watch Nike 5 features the Nike Sport Band that is made of compression-molded perforations for breathability and comes in new color choices that include Pink, Desert Sand, and Royal Pulse.

The newest and best Apple Watch

The Series 4 Apple Watch price changes across each of the four variations: 40mm and 44mm sizes, and with or without cellular / LTE service. The 2018 model carries a newer, slimmer design than the previous Series 3 Apple Watch, with an increased screen size to boot. That means a generally more pleasing experience, from checking the time to tapping through menus and apps on a larger screen. This design is unchanged in the most recent Series 5 version, so if you're just looking for a bigger, more usable screen than previous models, these Apple Watch sales are for you.

That said, the Apple Watch Series 4 doesn't have the always-on Retina display so if you're looking to sneak a peek at the time you'll have to do the full wrist motion which can get a bit awkward. If you're choosing between the Series 4 and Series 3, you should also know that the Series 4 offers a 64-bit dual processor which doubles the speed of the previous model.

Compared to the Series 5, the Series 4 has a lot going for it when you take its price tag into consideration. If you opt for the cheaper, slightly older model you're only losing an improved optical heart sensor, the aforementioned always on display, and a compass application.

A great watch at a lower price

The regular Apple Watch 3 delivered minimal upgrade from the Series 2. Still, it remains a top-tier device in terms of fitness and longevity, with run and cycle tracking on board and a water-resistant casing for swimming, plus the a heart rate monitor on the underside. And the LTE version comes with cellular connectivity so you can use it independently from your phone.

You will be losing some of the design benefits of the 4 and 5 models by opting for this cheaper Apple Watch price. The smaller screen and case size doesn't hold you back, but there's a much nicer option on the market in the latest chassis design. The watch itself is slightly thicker, and runs on an older processor that won't have you blitzing through apps quite as quickly.

Nevertheless, the Apple Watch 3 still stands as a strong smartwatch solution, especially if you're looking for something cheaper to use for fitness or music only. It's far more affordable than the later models while still offering the latest software. Essentially, Apple Watch sales will centre around this essential feature set that offers amazing value for money.

Fitness takes over the Apple Watch

The Apple Watch 2 isn't being sold by Apple, but it's still being pushed around by various retailers for those who want an older watch on the cheap. It includes specs and features not available on the cheaper Apple Watch Series 1. This includes GPS tracking, a brighter screen and waterproof specs that allow you to wear it in the pool.

The Series 2 Apple Watch price is half that of the later models but so is its feature list. For around $250/£250 you're receiving a stripped-down list of the most essential Apple Watch features, but it's worth remembering that they're still strong features for your money. It would be difficult to find more integration with iPhone applications for that price anywhere else, but you could be spending a little more cash for a lot more features with the newer models.

Your Apple Watch literally isn’t complete without the best deals on Apple Watch bands. They make the geeky smartwatch stylish enough to show off to late adopters.

Everyday in the news, we see new cheap Apple Watch bands trying to become the de facto alternative to the more expensive, official Apple Watch bands, and they’re usually just as good. Trust us, buying a trio of third-party, lookalike Apple Watch bands for the price of one official strap is a relief after paying so much for the smartwatch itself.