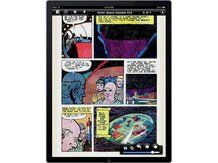 Magazines apps are already popular on the iPad

As 2011 shapes up to be the year of the Android tablet, Google is working to get publishers on board with a digital newsstand venture for Android devices.

The Android e-newsstand is set to include apps and content from a range of publishers but timings and further details are scarce.

The Wall Street Journal reports that El Goog has been talking to Time Warner, Condé Nast and Hearst Corp, although all three publishers declined to comment.

Ahead of the game

Apple already offers a range of digital magazines and newspapers in its iTunes store, but publishers are growing increasingly frustrated with Jobs' Lot's control over customer data.

Apple also takes a healthy chunk of subscription sales made through iTunes; around 30% goes to the fruity manufacturer, while Google has reportedly told publishers that its cut would be lower.

Google itself is staying tight-lipped about the venture, having released the following statement: "We've consistently said we're talking with publishers about ways we can work together, including whether we can help them with technology for subscription services. We have nothing specific to announce at this time."

via The Wall Street Journal