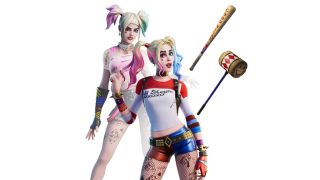 Following on from its Batman Day celebration in September last year, DC and Epic Games are teaming up once again to bring the 'fantabulous' Harley Quinn to Fortnite for a special Birds of Prey crossover event.

Teased by Warner Bros. and Epic on Twitter last month, Harley Quinn's Fortnite skin has been uncovered ahead of its release by leaker Lucas7yoshi who revealed that players will be able to purchase the beloved character from the Item Shop as part of the game's new 11.5 update.

While Epic Games has yet to officially announce the news, Harley Quinn is expected to arrive in the game on February 6 at 7pm ET according to prolific Fortnite leaker ShiinaBR.

In addition to the default Suicide Squad-themed Harley Quinn skin, Fortnite Insider has revealed that players will also be able to unlock an additional style modelled on her new Birds of Prey look once they've completed the following in-game challenges.

Fortnite's Birds of Prey tie-in will likely be the game's last major event before the highly-anticipated arrival of Chapter 2's second season, which will arrive on February 20.