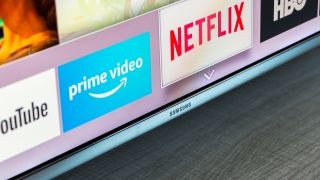 Choosing the best streaming service for you can be tricky. In fact, it's never been trickier considering that Netflix and Amazon Prime Video are no longer the two best options on the market.

In 2019, Apple TV Plus and Disney Plus both launched. And although the new services may not have as many TV shows and movies as Netflix and Amazon Prime Video in their vaults, they offer up great content both new and old with big plans for the future.

However, if you're looking to sign-up for just one streaming service, we recommend sticking with the two current favorites and choosing between either Netflix or Amazon Prime Video. But how do you decide which is for you?

Both have back catalogues of great movies and TV shows and offer fantastic original content too. They're also both available on lots of different platforms, whether you want to watch on your TV, your smartphone, or your laptop.

To help you decide, we’ve put together this handy guide to the top two streaming services available today.

Netflix is arguably more than a streaming service these days; it’s become a cultural phenomenon, with an enormous 158 million of us subscribing to chill and binge. (A number that's likely to have increased as we enter 2020.)

This huge number is largely down to Netflix’s wealth of original and syndicated TV shows and movies, as well as its simple user interface.

That’s not to say that Amazon Prime Video isn’t popular too. We don't have recent stats on Amazon's subscriber numbers, unfortunately, but a year ago it had reached 75 million users worldwide. Even taking into account the fact the latest figures would be much, much larger, it pales in comparison to Netflix.

One of the main differences between Netflix and Prime Video is the fact that access to Amazon's streaming service comes standard with an Amazon Prime membership.

This means the streaming service comes as standard alongside Amazon Music and premium delivery services, which costs $10.99 per month in the US or an annual fee of £79 per year in the UK. It’s also now available in Australia for an introductory price of AU$4.99 per month.

So, what does an Amazon Prime membership get you? The most famous of Amazon’s service is its free shipping, with same-day, next-day, and two-day delivery available depending on your location.

You also get access to a free Kindle ebook every month from the Kindle First service and another free book from the Amazon Kindle Lending Library, as well as Prime Music, which offers free music streaming of millions of tracks.

In the US and UK, you can also subscribe to Prime Video without an Amazon Prime membership for $8.99 / £5.99 per month; however, doing this is only marginally cheaper than buying the full membership, and for just a few dollars more, you get access to a host of fantastic services.

One of the best things about Netflix is how it uses clever algorithms to tailor its content to you, recommending shows and movies you might like based on your past viewing habits. Sure, these algorithms can get it wrong - and often caters to Netflix originals - but the Netflix algorithm is still one of its best features.

Another reason for Netflix’s popularity is its intuitive user interface, which makes it easy to navigate shows and films you’ve saved to your ‘list’, as well as making it easy to search by genre, director, actor and more.

Prime Video is curated in a similar way, seemingly taking inspiration from Netflix’s user interface; navigation still isn’t quite as seamless as it is in Netflix, but Prime Video is catching up with the streaming behemoth.

Amazon Prime Video also has a nifty feature known as X-Ray, which gives actor and trivia information about what's happening on screen as you watch.

Both services are available in your web browser, on smart TVs, iOS and Android smartphones/tablets, games consoles like the PlayStation 4 and Xbox One X, streaming boxes and dongles like the Roku Premiere+, Amazon’s Fire TV devices, Apple TV, and compatible Blu-ray players.

Netflix also has its own Google Chromecast app. Currently Prime still doesn’t have an official app, but you can cast Prime Video from your laptop or smartphone to your TV using the streaming dongle.

In terms of picture quality, both services offer content in a range of definitions – but Prime video wins out when it comes to streaming in 4K.

While Netflix does offer a range of shows and films in 4K (and some in 3D if you have a compatible device) you’ll need to pay extra to access Netflix’s 4K content, though, which costs $3 / £2/ AU$4 more than its Standard plan.

This is where Amazon triumphs over Netflix; it offers more 4K content, and it doesn’t charge any extra for the privilege. So, as long as you have a compatible device, you can stream in ultra HD straight off the bat.

One cool feature of Netflix picture quality is its dynamically-scaling streams mean you don't need to choose the quality level you want to watch at. If your bandwidth is low it will deliver just the standard definition versions, but if you've got the hardware and the correct subscription plan, it will go all the way up to 4K Ultra HD resolutions if available.

If you want to watch content offline, both services allow you to download selected shows and movies.

Netflix downloads stay in your library for 30 days at a time, and will automatically expire at that time – even if it's on a device that isn't connected to the internet.

Prime Video titles also have a limited viewing period that varies between different titles; generally, you’ll have around 30 days to watch your downloaded content, and once you start watching it, you have to finish it within 48 hours before it’s deleted.

Netflix has a huge range of exclusives, originals and classics to get stuck into, and is fast becoming a respected distributor of original movies and TV series.

This is especially true since Netflix Original movie Roma took the award for Best Cinematography, Best Director, and Best Foreign Language Film at the Oscars back in 2019 and The Irishman has been nominated for a number of similar awards in 2020.

Its best-known original series include Orange Is The New Black, Bojack Horseman, Stranger Things, Daredevil, Maniac, and House of Cards, while more recent editions include Lost in Space and The Witcher.

Of course, it’s not only about original content; a huge part of Netflix’s success rides on the enormous variety of syndicated content it puts out, from thriller Breaking Bad to its extensive range of kids shows and movies.

Prime Video also boasts a huge library of content. In terms of TV shows, there’s a wealth of exclusive series like Tom Clancy’s Jack Ryan, The Man in the High Castle, Transparent, and Mr. Robot, as well as syndicated shows like The Office US, The Walking Dead, and Parks and Recreation.

It also has a more extensive range of films than Netflix, with rough estimates placing it as around 18,000 movies and 4,500 TV shows, compared to Netflix’s 11,000. Plus, Amazon often gets the rights to new releases much quicker than any other streaming service, with movies like Mary Queen of Scots, Crazy Rich Asians, and Bohemian Rhapsody already available to watch (at least in the UK).

However, most of these newer films and TV shows aren’t actually included as part of the Prime Video subscription, which means you have to either buy or rent these titles to watch them.

This is where using Prime Video can be confusing; you have to be really careful about which movies and shows are included in your subscription and which are part of Amazon's video storefront. Amazon is pretty good about flagging Prime Video content and warning you before you make a purchase, but the fact that the two types of videos are mixed together can make things confusing.

According to Amazon, it also offers free streaming of Thursday Night Football. A spokesperson told us that "games are included with Prime and viewers are able to stream the games live with X-Ray, which allows viewers to access stats, past plays, team info and more".

With both Netflix and Amazon Prime Video offering such a fantastic wealth of content, either platform is a brilliant choice – but you should ask yourself a few questions before making your decision.

Are you looking for a really simple one-stop-shop for streaming TV shows and movies? Opt for Netflix. Do you regularly buy online from Amazon and want to save money on your shipping costs? Try Prime Video – it's built-in to your Prime subscription so there's nothing really to lose.

Just to confuse things even more, if you're a huge fan of Marvel or Star Wars, look to Disney Plus instead.

Price-wise, if you subscribed to Prime just for the shows and movies, there’s not a huge difference between the two services - but Amazon Video does give you the option to pay for new films a la carte, which is a nice option.

As there isn’t a huge amount of crossover between the content available on each platform, looking at which TV shows and movies appeal to you the most is a pretty good way of choosing between Netflix and Prime Video: If you’re a RuPaul’s Drag Race devotee, Netflix will be your best bet, but if you like the look of Tom Clancy’s Jack Ryan, you should go for Amazon Prime Video – both services offer a great variety of content, so be sure to look through each library before you make your choice.