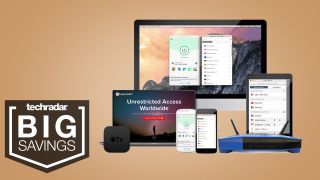 Hunting out the best VPN deals may not feel like the most festive use of your time, but if you're wanting to protect your new tech devices or facilitate streaming of the family's favorite Christmas movie then it's worth downloading a VPN while the prices are reduced.

VPNs' encrypted tunnels make them brilliant at helping you stay anonymous online, while their ability to modify your IP address potentially opens up a whole new world of shows and sports to stream.

And what better season to purchase one than now - we've got some fantastic VPN deals. Even the world's best service - ExpressVPN - has 49% off and three months free.

The only problem with all of this choice? Many have been announced as winter deals, so we don't know how long they'll be around. But keep reading, and we'll take you through our favorite VPN deals that you can get right now.

1. The absolute best VPN around:

ExpressVPN | 1 year | $6.67 per month and 3 months FREE | 49% off
It isn't the cheapest provider or the largest discount, but with fast speeds, 24/7 live chat, and best-in-class encryption, ExpressVPN is TechRadar's #1 trusted VPN for privacy and unblocking content worldwide. Not only does the provider offer 30-day money-back guarantee and a massive 49% discount off but you're also getting 15 months for the price of 12.
View Deal

Cyberghost | 1 years | $2.50 per month | 76% saving
Get a whole year of this fantastic VPN provider for just $35, that's just about $2.50 a month. Not only is Cyberghost offering a slightly insane discount, this provider is within our top five best VPN rankings, it also boasts 5,700 servers and can support up to 7 devices. We're told that this deal will end on Friday, December 27
View Deal

3. A discount and freebie from a VPN name you know:

NordVPN | 3 years  + 3 months FREE | $3.49 per month | 80% off
We're absolutely loving NordVPN's fantastic discount, not only are you getting an ace product but the provider is also throwing in an extra 3 months of VPN absolutely free. And the added bonus (especially if cybersecurity is your concern) is that you'll get FREE access to its NordPass password manager app, too.
View Deal

4. One of the cheapest VPN deals of them all

Surfshark | 2 years + 1 month FREE | $1.99 per month | 84% off
Surfshark is the gift that just keeps on giving. Not only is it usually quite a cheap VPN - this whopping discount means that you can get 25 months of all of your VPN needs sorted with one payment of $47.76. We also love this provider as it boasts a wide range of features along with excellent, speedy chat support.
View Deal

SaferVPN| 3 years | $2.50 a month | 81% off)
This is the ideal VPN deal for anyone concerned with cybersecurity first, SaferVPN ensures online safety and has automatic protection when you access insecure Wi-Fi. However, its feats don't stop there as the provider can also unblock Netflix, making it great for streaming fans. Sort out all of your VPN needs for the next three years with a one grand total of $89.99.
View Deal