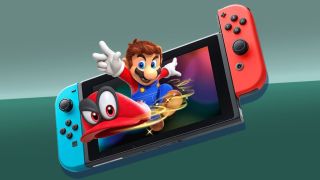 Given that the original Switch can only output to 720p in handheld mode, and 1080p to a TV when docked, many are hoping a new model would see a jump in resolution to match the likes of the 4K-capable Xbox One and PS4 Pro.

There had been reports of a new console getting a mid-year release around E3 2020, but recent rumors have tempered those hopes, pointing at most to a slightly revamped processor – the release of the handheld-only Switch Lite last year has probably kept Nintendo's factories sufficiently busy too.

The hardware we deserve

Furukawa's comments came at a financial briefing to mark the end of the latest fiscal year, with an expected forecast of 18 million Switch console sales – and a whopping $1 billion (£760 million / AU$1.5 billion) made from Nintendo's Android and iOS mobile games.

We have now got word of a new Nintendo Switch design to mark the release of Animal Crossing: New Horizons in March, with a peaceful blue/green color palette and adorably decorated dock – it may not be a jump in power, but it's certainly the kind of fan service designed to tide us over until there is one.