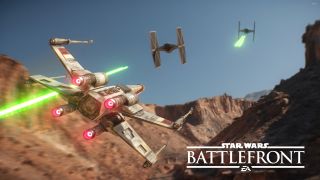 Roughly a year after its initial release, first-person shooter Star Wars: Battlefront is getting its most anticipated update yet. From December 6, a new DLC pack will let PlayStation VR owners jump into the virtual cockpit of their very own X-Wing starfighter.

The catchily-named 'Star Wars Battlefront Rogue One: X-Wing VR Mission for PlayStation VR' will be a free update for all Battlefront owners - though you'll obviously need Sony's PlayStation VR headset to take advantage of it.

Catch a glimpse of the action in the trailer below on PS4:

The VR mission will accompany two other Battlefront launches in December.

A final DLC pack for Star Wars Battlefront will also land on December 6 as part of the game's Season Pass. As its name suggests, the Rogue One: Scarif pack will feature four new maps based on the first spin-off movie from the Star Wars universe, and will feature Rogue One: A Star Wars Story characters Jyn Erso and Orson Krennic.

To round things off, an "Ultimate Edition" of Star Wars Battlefront will also be released, collecting the main game and all four Season Pass expansion packs, plus the VR mission.