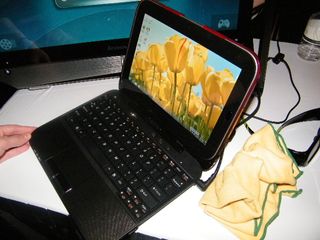 It may look like a laptop here, but LePad is Lenovo's first tablet release

Lenovo has announced the creation of a special division for developing and manufacturing tablets.

The new mobile internet and digital home division will be dealing in tablets, smartphones and web-connected TVs.

It's a vote of confidence in the fledgling tablet market which is set to go stratospheric in 2011.

Lenovo's first tablet effort is the LePad, which sounds suitably continental and offers Windows 7 and a keyboard dock to transform it into a laptop when required.

Hopefully the new division will put a bit of fire in Lenovo's tablet belly, since the LePad was originally revealed way back at CES 2010 and is yet to hit the shelves.

Lenovo's Peter Hortensius told Yahoo News, "This is definitely going to be a very important year in tablets." He expects there to be a "lot of winners and losers" - we wonder which Lenovo will turn out to be.