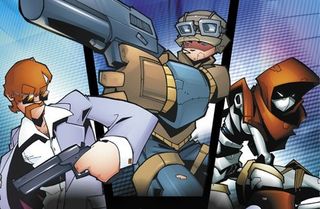 This is not a drill. THQ Nordic has announced that the TimeSplitters franchise is officially making a comeback.

Last year THQ Nordic acquired the rights to the TimeSplitters IP, but we've been in the dark as to what the company planned to do with it. Until now.

In a recent press release, THQ Nordic revealed that the company has hired Steve Ellis, one of the original series' creators, "to help plot the future course for this franchise". In other words, TimeSplitters is definitely making a comeback.

While there's been talk of a TimeSplitters 4 fan project for a while (TimeSplitters Rewind), there's been little in the way of solid details regarding an official new addition to the series. We were starting to lose hope.

THQ Nordic hasn't revealed if the future of the franchise will involve rebooting the series, continuing on from Future Perfect or remaking the original three games but, either way, for the sake of authenticity it's encouraging to see a co-creator on board.

Originally released in 2000, TimeSplitters is a first-person action shooter which sees you traveling through time in a story mode spanning several centuries in an effort to stop an alien race of TimeSplitters from wreaking havoc on humanity, and time itself.

The series comprises three titles: TimeSplitters, TimeSplitters 2 and TimeSplitters: Future Perfect. In each game you time-travel to a particular point in time, and in each time period you either take on the role of (or team up with) a character from that time period, many of whom are stereotypes of pop culture references, such as the sleazy 70s secret agent or the veteran British adventurer.

On top of the main campaign, each game offers a map-maker, multiplayer arcade and challenge mode.

TimeSplitters was originally created by Free Radical Design, which later became Crytek UK. Speaking to TechRadar in 2012, TimeSplitters developer Steve Ellis revealed that there was no chance we would be seeing TimeSplitters 4 on PS4 or Xbox One, as the series proved difficult to market in the modern games climate. Crytek eventually shut down in 2014 and the majority of staff were moved to Dambuster Studios, hammering the final nail in the coffin of a potential TimeSplitters 4 title – until now.

We can't wait to see what THQ Nordic has planned for the series.