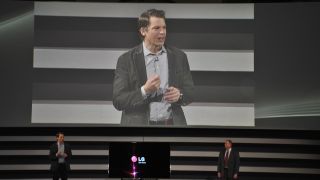 It's not about more pixels, it's about better pixels

LG and Netflix are heading into 2015 with a rather significant partnership, which the pair announced during LG's CES 2015 press conference.

Netflix's chief of streaming and partnerships, Greg Peters, came on stage to announce that Netflix will be delivering HDR content to LG TVs this year. HDR (or High Dynamic Range) improves the depth of each pixel to create richer colours.

The duo also confirmed that they'll be offering a "Recommended TV" program, which we assume means Netflix will offer different TVs depending on the content you're after. Expect to hear more during Netflix's press conference later.

Techradar's coverage of the future of tech at CES 2015 LIVE is brought to you courtesy of Currys PC World. View Currys' full range of the latest TV, Blu-ray and home cinema systems here.