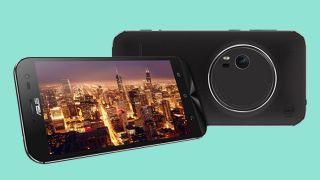 Inspired by DSLR cameras, Asus has finally announced the camera-focused ZenFone Zoom is ready to land early next month.

It might have taken more than a year - having gotten us excited about the ZenFone Zoom at last year's CES - but Asus has finally revealed a US release for early February, along with a price tag of US$399.

With it's focus on DSLR-like features, the Asus ZenFone Zoome boasts a 13MP camera with a Panasonic sensor and 3x optical zoom at 28-48mm focal length, meaning you be able to focus in on things as close as a few inches away.

It's still a phone

Selfie-enthusiasts get a 5MP front-facing shooter, while Asus is touting the Zoom's 13MP camera to also include a 10-element lens created by Japanese company HOYA.

The ZenFone Zoom is set to come in 64GB or 128GB storage options, though it also supports microSD cards up to 128GB.

Asus will be showcasing the ZenFone at CES 2016, so we'll get a better look during this week, however more details about the US release won't be announced until January 20.