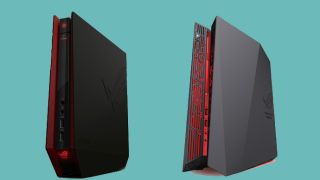 Valve may have delayed its Steam Machines until 2015 but that's not stopping some people from building up the hype.

Asus is next to join the roster, unveiling two Steam OS-ready boxes at this year's Computex show in Taiwan.

The Asus ROG GR8 is a compact beast, hosting a Core i7 processor and Nvidia Geforce GTX 750Ti inside a 2.5 liter box. It also offers 4K output and Miracast support.

This will ship with Windows 8.1 from launch, but Asus is planning a Steam-specific version that'll launch when Valve signals the green light.

Sounds GR8, what else?

Also getting the Steam treatment is the ROG G20, a more powerful machine that holds a Geforce GTX 780 processor and Intel Core i7 CPU.

And as an added bonus it rocks a customisable lighting setup so you can get funky while you play.

Again, this will arrive this year but be re-launched as a Steam Machine, bundled with Steam Controllers, some time in 2015.