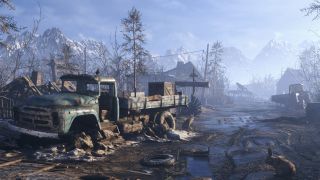 Two new games are joining the ranks of Stadia Pro freebies on Google's video game streaming platform, with Metro Exodus and platform-exclusive Gylt now being given away to Pro subscribers for free.

'Free' may be a deceptive word, though, as you'll need to have a $9.99 / £8.99 per month Stadia Pro subscription to get access, as is the case with the free titles on PlayStation Plus or Xbox Games with Gold.

But it should certainly sweeten the deal for those signed up to the premium Google Stadia tier, which lets you jump up to 4K/HDR streaming quality, as well as netting you the odd free game and a smattering of discounts on other Stadia games.

Metro Exodus is a 2019 survival-action game developed by 4A Games, and is the third title in the Metro franchise, putting you in the uncomfortable shoes of a traveler in post-apocalyptic Russia, fighting off mutated beasts in the "shattered ruins of dead Moscow".

It's a headline game for the platform, given its AAA status and recent release, but it's still just one of a rather bare library of Google Stadia games. The other free title, Gylt, is a mystery-thriller exclusive to Stadia, but likely won't be the reason anyone makes the shift to the Pro tier.

The titles join Thumper, Rise of the Tomb Raider, Samurai Showdown, Farming Simulator 19 and Destiny 2 – all of which were available through the Pro tier at launch.

Google has confirmed that over 100 new games are coming to the Stadia platform, including 10-plus exclusives. In a year's time, Stadia will likely have massively expanded in scale – though the Pro tier will need to make a strong case for itself if it's to become as popular as its Xbox or PlayStation equivalents.

In the meantime, with so few Google Stadia games available we'll have to survive on scraps like today's announcement.