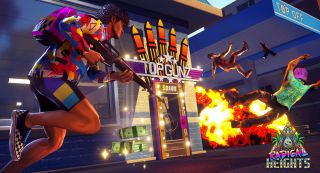 Not more than five days after Lawbreakers studio said it was moving onto other projects, Boss Key Productions has released a new ‘80s-infused battle royale-style game called Radical Heights.

Available as a free-to-play, Early Access title on Steam, Radical Heights is a cheerier take on the PUBG formula which drops players into a murderous game show. From the looks of the first reveal trailer, the game aims for an even more cartoonish take on violence than Fortnite with a colorfully cheesy ‘80s aesthetic full of neon lights and a distinctly casino-inspired setting.

Radical Heights is also different in that the gameplay revolves around cash. Players can earn said monies by hitting stores, competing for prizes earned through in-game challenges and, obviously, attempting to kill each other.

All money earned in matches can be used to buy better weapons similar to the purchasing new guns in Call of Duty’s Zombie modes. Alternatively, players can bank their money to buy new cosmetics or to quickly purchase a weapon in their next match.

Radical Heights is available on the PC through Steam Early Access starting today. Although the game is free-to-play, a $14.99 (about £10.60, AU$19.35) ‘founders pack’ includes exclusive items and bonuses.