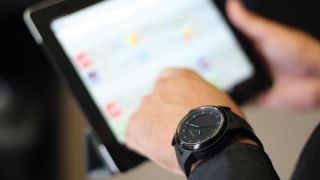 Toshiba's plotting the DIY of wearables

Google's Project Ara could be a smartphone revolution, but why stop there? Toshiba has big plans to push the modular concept beyond the phone and into wearables.

As one of Google's partners on the Ara project, Toshiba sees a lot more potential in the mix-n-match project, as it revealed at the Ara Developer Conference.

Shardul Kazi, Toshiba's senior vice president, said that smartwatches and other wearables could also use be formed of block-like modules, allowing owners to customise their own device.

During the presentation, Kazi showed a concept where a module could be taken straight from the phone and placed into a wearable device. In the example given, it was an activity tracker with a nine-axis sensor.

It's all just at the idea stage right now, according to Kazi, but Toshiba has obviously put a lot of thought into modular wearables. It certainly makes a lot of sense.

For the time being, the focus will be on the smartphone and seeing whether the world is ready for a phone that it can build itself. Oh, and maybe a tablet wouldn't be a terrible idea either.