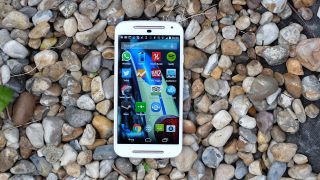 According to a leaked advert from Chilean month phone company Entel, Motorola is set to announce a new version of the Moto G alongside a Moto X Sport.

The name of the latter suggests it's set to be a rugged handset for those that need a waterproof option or one that can take a few knocks - but we don't know that for certain just yet.

Leaked images show it'll have a 5.2-inch screen, the same as on the current Moto X, and under the hood is a 1.5GHz CPU. Sadly not much else is known about the inner workings. There's also a 16MP rear facing camera and a 5MP front facing camera.

The new Motorola Moto G will include a 5-inch screen much like the last version, as well as a 13MP rear facing camera and 5MP snapper on the front.

The processor is rumoured to be getting a bit of a boost as well up to 1.4GHz from 1.2GHz on the last version.

Obviously there are some doubts in these details, so don't go treating them as fact, but we will eagerly await news from Motorola soon.