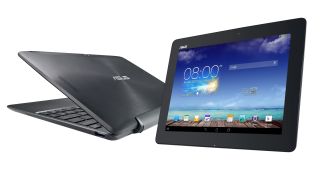 Transforming through dimensions, by the looks of things

After some rather unsubtle teasing, Asus took to the stage at IFA today to unveil the new Transformer Pad.

The 10.1-inch Android tablet has been revamped with a 1.9GHz Nvidia Tegra 4 quad-core processor, along with a 2560x1600 IPS display. It'll also be able to stream 4K via its HDMI output.

The new Transformer Pad TF701T features a 5MP rear camera and mobile dock with USB 3.0. As for sound, Asus has that covered with its SonicMaster audio technology.

Asus claims a 17-hour battery life when the device is docked which means the Pad should last for two days between charges.

The tablet has a durable metallic design too and measures 8.9mm thick at a weight of 585g.

No release date or price has been announced yet so hold tight. We'll be going hands on with the new Transformer Pad soon and will be letting you know what we think.