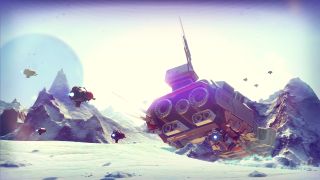 Sony, pleeeeaaase tell us when No Man's Sky will be here

Ah Gamescom - the E3 for those who prefer a little less stress and a little more German cuisine in life. That said, the Cologne-based game show is starting to rival its Las Vegas sibling, and has become a platform for some pretty significant announcements and reveals in the recent few years.

PC gaming might be having its golden age but Gamescom will hopefully remind us why it's still a great time to be a console player.

We've learned not to raise our expectations too high, so for this year's show we think our wish list is pretty reasonable (no Fallout 4, despite the fact Bethesda is officially scheduled to make an 'action-adventure & RPG'-related announcement).

Read on for TechRadar's five big Gamescom predictions for 2014.

1. A No Man's Sky release date

No Man's Sky was one of our choice games of E3 (it earned my personal 'best in show' award) and so we're all pant-wettingly excited to find out when we'll be able to play one of the PS4's most anticipated titles.

Sure, it might turn out to be an overhyped snoozefest of repetitive, barren wastelands to explore. But it might also turn out to be the most awesome procedurally-generated game ever made. We're going with the second option for now.

All we want is a release date, so we can book the time off work before everybody else does. Not sure how long we'll need, although the game's creator Sean Murray said that if we were to visit one of the game's virtual planets ever second "our own sun will have died before [we'd have] seen them all".

Maybe a few days, then.

PlayStation Now has just launched in open beta in the US, so we're really hoping to hear more about Sony's global plans for the service. A firm UK launch date would be gratefully accepted, along with details on how the pricing will work on the European side of the pond.

Sony's Jack Buser recently confirmed that the company is working on a subscription service, a la EA Access, and informed us that PS Now will "soon be coming to PS3, PS Vita, PlayStation TV and select 2014 Sony TVs". Hopefully, Gamescom will let us know how soon that will be.

According to the official Gamescom site, Valve will be showing off its Steam Controller at the German expo. The question is: will it be the new and improved one, complete with additional thumbstick?

We certainly hope so. With Valve's Steam Machines now pushed back to 2015, it feels as though the hype has diminished. Fingers crossed that Gamescom can get us excited once again for Valve's living room crusade.

Microsoft's white Xbox One is looking like a sure thing for October, so what better time to officially announce it than Gamescom? The lighter-toned console was given exclusively to Xbox employees last year, with only the standard black version available to the rest of us normal types.

Word has it that the console will be sold alongside Sunset Overdrive (because what better way to celebrate the console's most colourful game than with a white Xbox One?) which launches on October 28. All signals are good.

Look, we're not giving up hope, so just shut up, yeah? It could happen. At E3, Sony's Yoshida said the game is still in development, so there's every chance we could see another tease at Gamescom.

For me, this is the new Half-Life 3. And in a week where Valve has shown its most promising sign in years that Gordon Freeman could soon make a return, I'm more optimistic about these things than ever.