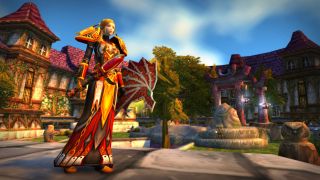 World of Warcraft Classic goes live on August 27, but Blizzard is anticipating long queues for some of the more popular realms, meaning there’s a possibility you might be waiting for ‘several hours’ to actually get in and start playing on launch day.

This came to light earlier this week and was reinforced during a Reddit AMA with the WoW Classic devs yesterday, with a senior game producer, ‘Chromschi’, observing that: “On the most popular servers, such as Herod and Shazzrah, we are currently estimating lengthy queue times – up to several hours or more in certain instances.

“That is why we strongly encourage players to use the name reservation period to transfer their characters and their guilds to lower pop realms.”

By spreading this information now, Blizzard is hoping that some players will put in for a transfer, and that the firm will better be able to balance out the relative populations of the various servers.

Executive producer ‘AltruisWoW’ further noted that there are contingency plans to bring up additional realms in a swift manner if necessary, adding: “As you can imagine, it’s difficult for us to gauge how many people will come to play Classic and stay on to experience max-level content. Ultimately, we want to see realms with healthy stable populations so we’ll try to match demand without inadvertently creating low population realms in the process.”

The central problem here is likely to be that as World of Warcraft Classic is free to any existing subscriber, an absolute ton of people are likely to jump in next week, just to give it a whirl for nostalgia’s sake (or pure curiosity).

Therefore there’s the prospect of a massive logjam of players, but the initial frenzy will likely die down soon after as those who are only casually interested in the idea of stepping back in time 13 years fall away.

That could then create the opposite problem, leaving some realms with a very low population, and therefore feeling rather dead.

So Blizzard might have to try to rebalance things, but the theory (or hope) is that on a general level, the WoW Classic player base will then increase steadily, as the hardcore get sucked in by the traditional gameplay mechanics and design. The latter present much steeper challenges than the base game, encouraging more social interaction, and therefore stronger bonds between players and guilds.

As one dev has previously said: “This difficulty drives you to rely on other players to help you – and that in turn strengthens the emerging social connections.”

So that’s the theory, but the initial practicality of this fresh-but-old spin on the MMO could be quite frustrating with the queuing by the sounds of things, as while Blizzard is telling players to be sensible and use transfers if necessary, these messages often fall on deaf ears.

The good news is that any huge queues are likely to be a temporary situation, as mentioned. But still, it seems there’s a definite danger of some enthusiasm being seriously dampened by long waiting times come launch day.

As an interesting side note, exec producer AltruisWoW also stated that character boosts were not in-keeping with the Classic version of the game, and confirmed they would not be introduced.