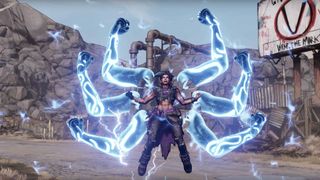 Flex your PC build just like this (Image credit: Gearbox)

Borderlands 3 is simply one of the most anticipated games of the year, and if you were on the edge of your seat wondering whether your PC can run it, you can relax: the system requirements are here.

Over the last few months we've been inundated by PC games with crazy high system requirements – looking at you, Control – but, it looks like a lot of people are going to be able to have a smooth experience in Borderlands 3.

Borderlands 3 will only require an AMD Radeon HD 7970 to run the game, a graphics card that's seven years old at this point, along with 6GB of RAM and an AMD FX-8350 processor. The way we look at it, this is excellent news, as it means that pretty much everyone that wants to get in on Borderlands 3 will be able to.

But, don't take that to mean that the game won't have the latest visual effects. In a blog post on the game's website, Gearbox has listed out the graphics options that you can use to customize the way the game looks. Among these are volumetric fog, AMD FidelityFX Sharpening – which will essentially upscale the image from a lower resolution – and, of course, a field of view (FoV) slider.

Of course, if you want to enable all of these effects to their full potential, you're going to want a stronger GPU, which is likely why Borderlands 3 suggests an AMD Radeon RX 590.

We went ahead and listed out the system requirements below, but just keep in mind that these are for 1440p gaming. So, if you're looking to play Borderlands 3 on one of the best 4K monitors, you're going to want to step that GPU up a notch – maybe to an AMD Radeon RX 5700 XT, or even an Nvidia GeForce RTX 2080 Super.

Teaming up with Team Red

Rather than a partnership with Nvidia to bring shiny ray traced graphics and DLSS tech to Borderlands 3, Gearbox has teamed up with AMD instead. The game will be using FidelityFX, and the fact that it's prioritizing AMD Ryzen processors in its system requirements may mean that the game will be heavily multi-threaded.

The way we look at it, this is excellent news. Having multiple high profile games targeting different hardware manufacturers means that the features that divide AMD and Nvidia will only get better as time goes on. We've already seen Nvidia's software features getting all kinds of headlines in games like Control and Metro Exodus, its about time we see the same with the new FidelityFX features in the latest AMD Navi graphics cards.

We're sure that more games will be using AMD's technology over the coming years, but if you've recently grabbed a Ryzen 7 3700X and a AMD Radeon RX 5700, it will pay off in Borderlands 3 on September 13.