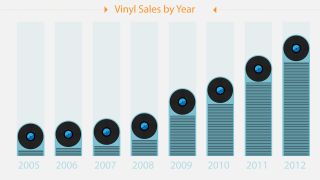 The rise of hipsters bodes well for Amazon vinyl

Vinyl is aliiive! According to Amazon anyway.

The e-tailer giant has seen a steady 745% increase in vinyl sales since 2008 and released an infographic today to prove it. Because you know it's true if it's in an infograph.

Reasons for the high percentage may be cultural (hipsterism?) and in some part down to Amazon AutoRip, a feature that offers a free MP3 version of certain albums alongside the physical vinyl and CD.

Our blips are something of a cultural phenomenon too.