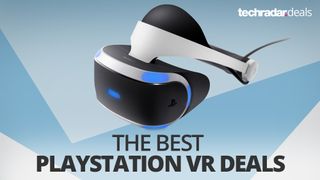 UPDATE: Sony is offering a massive discount on the PSVR bundle, which includes the camera and a game. Scroll down to find out more.

Falling in well under the price point of the Oculus Rift and HTC Vive, the PSVR headset is an excellent option for those who already own a console or want a system capable of regular gaming as well.

On this page, we've sifted through prices and sales on the PlayStation VR headset itself, and any other bundle it may be wrapped up in. We've also got the PlayStation Camera, which you need in order to use the PSVR headset, and the Move motion controllers which are used in some VR games.

If you're looking for the ultimate console to go with your PSVR, check out our PS4 Pro deals.

Below, you'll find our automatically updating list of PlayStation VR headsets, so that if there are any price drops from certain retailers (we're looking at you JB Hi-Fi), you'll be able to find the best price as it changes.

If the list happens to be empty, it could well be that the somewhat-scarce stock supply has run dry, so check further down for bundles or check back in within a week or two to see if the stores have been resupplied.

This is the cheapest we've seen a PSVR bundle in quite some time. Sony is, perhaps for the first time, offering a great discount of nearly 42% off the RRP for this bundle. With an affordable price, it's never been a better time to step into the world of virtual reality if you've been keen on trying it for yourself.View Deal

Firstly, if you don't buy a PS4 Camera with your PlayStation VR headset, it will not work. So when considering your foray into the world of virtual reality, save yourself some dollars on the essentials and check out table below for any savings to be had on the camera. That's if you haven't already found it as part of a bundle above.

While the PlayStation Move controllers are an optional addition to the VR experience, there are many games that support the dedicated motion controller. However, most of these will allow you to use the standard DualShock PS4 controller in its stead, so don't feel too miffed if you don't score a sweet deal on these pink and blue disco-sticks.

Keep an eye on this handy chart below as we'll update it with the latest prices for a wide range of PlayStation VR games. To compare prices on individual titles, click the 'View all deals' button at the bottom of the chart.